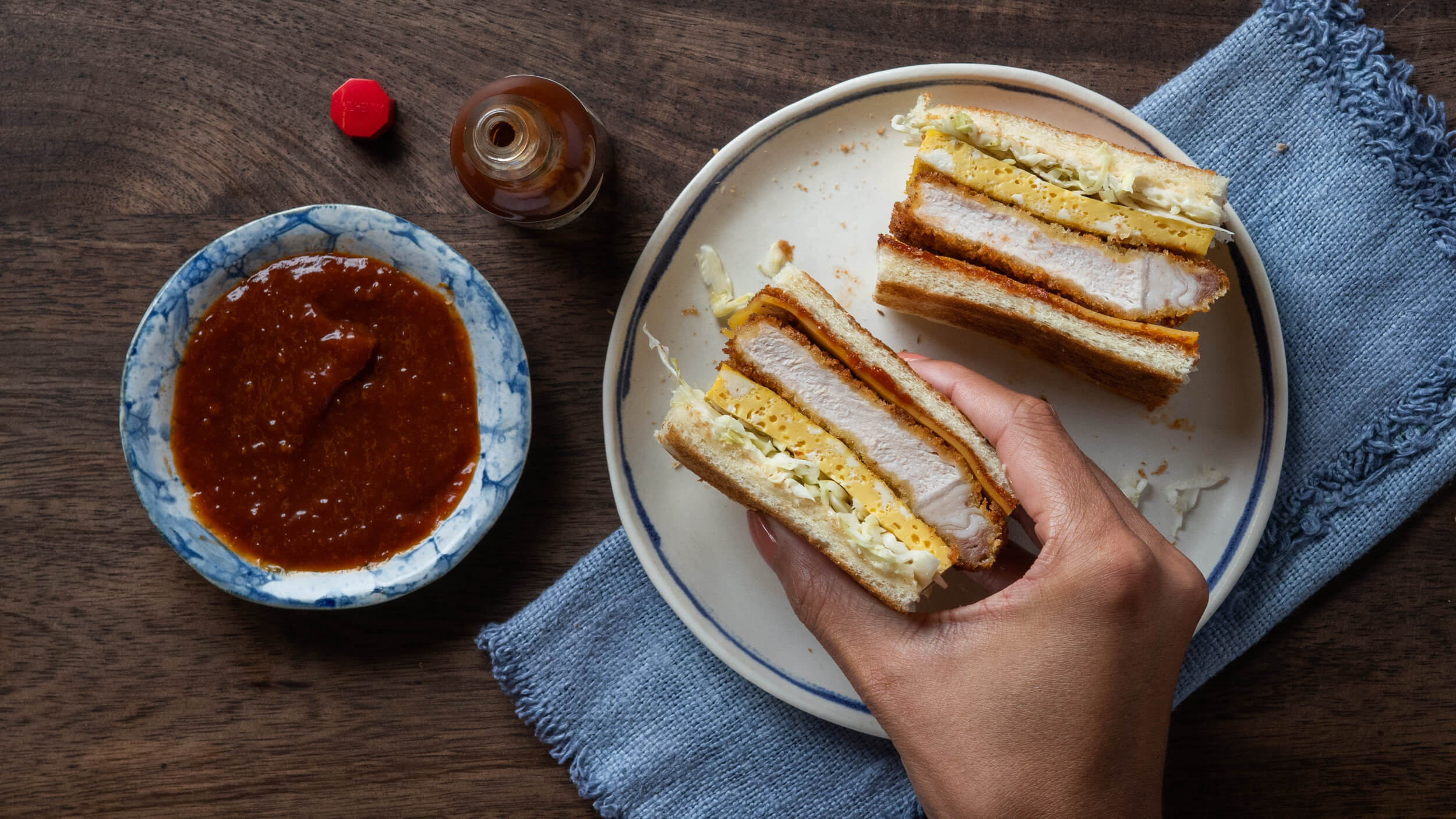 For the pork brine:

For the pickled cabbage:

For the Japanese omelet:

For the pork brine:

Place the pork between 2 pieces of cling film and bash with a meat pounder (or the back of a knife) so they are even and about 1cm thick.

Combine the maple syrup, salt, sugar and TABASCO® Chipotle Sauce in a bowl, add 8 cups of water and whisk until the salt and sugar has dissolved.

Add the meat to the brine, then cover and chill for 12 hours. (This can be done up to 2 days ahead.)

For the pickled cabbage:

Combine the rice vinegar with 1 cup of water and stir until the salt and sugar has dissolved. Add the shredded cabbage to the pickling liquid. Cover and chill for 1 hour. (This can be done up to two days ahead.)

Heat the oil on a medium heat and cook the onion, garlic and ginger until soft (approx. 8 minutes). Add the rest of the sauce ingredients and cook until it has reduced down to a third (approx. 6-8 minutes). Transfer the mixture to a blender and mix until smooth. Cool, cover and chill. (This can be done up to 5 days ahead.)

Crack the eggs into a mixing bowl along with the rest of the ingredients and beat well with a fork. Heat a splash of sunflower oil in a pan and once hot, add the egg mixture and move the pan around to spread it out evenly. Using a spatula, ease around the edges of the omelette, then fold it over in half. When it starts to turn golden brown underneath, remove the pan from the heat and slide the omelette onto a plate.

Grab three shallow bowls: fill one with flour, one with egg and one with panko breadcrumbs.

Divide the pork into at least 4 portions, although you may have more slices depending on how thinly you slice the meat.

Cut the cheese and omelette to roughly same size pieces as the pork.

Heat 2 tbsp oil in a skillet over a medium-high heat. Cook the pork until golden brown and cooked through (about 3 minutes per side). Transfer the pork back to the wire rack. Wipe out the skillet and repeat until all the pork has been fried.

Toast your bread in some oil until it’s golden brown, and now build your sando from the bottom up: Put mayo on the bottom piece of toast add the pickled cabbage, then the fried pork, the cheese, top it with the katsu sauce and then the other slice of toast.

Place a weight on top of the sando so it can ‘settle’ (I use a plate with a mug on top) and after 4 minutes, cut the crusts off the bread and slice the sandwich in half.