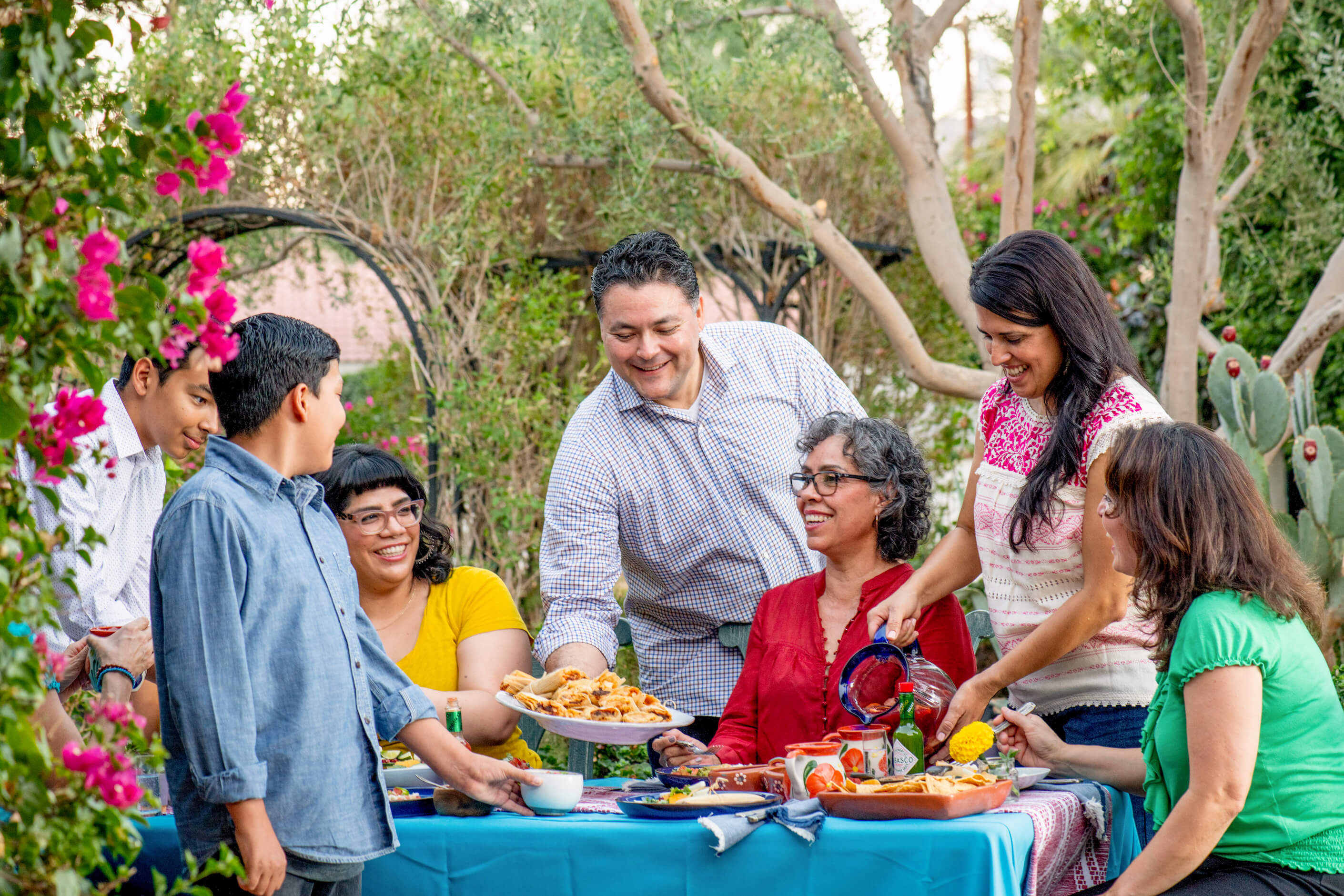 Every year before Christmas, my family planned a tamalada, a Mexican holiday tradition in which we get together and make a large batch of tamales.

It usually took place at our house, and my aunts, cousins, and sisters would all be there. My mom, who organized and hosted the tamalada would make sure to have a large pot of food, such as pozole (traditional hominy soup), for our family to enjoy during the laborious day of preparing tamales. We would also usually enjoy a special seasonal drink together, such as atole (flavored porridge) or ponche Navideño (hot cider). Tamaladas would allow our family to enjoy delicious tamales during Christmas, but most importantly, they would bring us together to continue Mexican traditions and create beautiful memories.

If you’re interested in hosting your own tamalada this year for family and friends, I have a few tips to ensure yours is a resounding success:

1. Making a large batch of tamales can take many hours, so it is important to prepare some of your ingredients ahead of time. For example, soak the corn husks you use for wrapping the tamales for at least two hours prior to using them. This will make the corn husks pliable enough to work with. Also, you can cook and shred your meat the night before and have it ready for the day of the tamalada. Other ingredients that can be prepared ahead of time include the sauces you will use, roasted chilies, and cheese cut into strips. Having as many ingredients prepped as possible will make your tamalada run more smoothly and efficiently.

2. If you like an extra kick, keep a selection of flavorful pepper sauces nearby to add to your masa dough or your filling as you work. I like adding TABASCO® Chipotle Sauce to my dough for a bit of smoky flavor and an appetizing golden color. You can also mix the sauce into your filling for a brighter flavor and a kick of heat.

3. It is a good idea to have an assembly line of family members doing different tasks to complete the large batches of tamales. During our tamaladas, growing up, I remember having certain tasks assigned to me. Cleaning the corn husks was one of them. Although not one of my favorite tasks, making sure the corn husks were free from corn silk and debris was very important. Another task was spreading the masa (corn dough) onto the corn husks, then passing the dough-filled husk on to the next person, who would fill the tamales and then wrap them.

4. Tamales are well suited for freezing and reheating, so you can enjoy them all season long. Typically, our family would assemble 200-300 tamales during our tamaladas. Once the tamales were all done and cooked, we would divide the tamales and everyone would take their batch to enjoy during Christmas time.

Here’s one of my favorite tamale recipes, from my kitchen to yours. ¡Feliz Navidad!

1. Soak the dried corn husks in a large bowl filled with hot water. Place a heavy pot on top of the corn husks to submerge them in the water, and soak them for at least two hours prior to using them. Once pliable, rinse each corn husk under running water to remove debris.

2. In a large bowl, mix the masa harina, baking powder, and sea salt together, then add the warm vegetable broth to the flour mixture. Mix in the broth using your hands to incorporate the broth into the flour to make a firm dough. In a mixer, cream the butter and shortening until fluffy, then add the masa dough little by little into the mixer until well mixed. Continue mixing the masa at a low-medium speed for about 5 minutes, scraping the masa off the sides of the mixing bowl during mixing. Add 2 tablespoons of TABASCO® Chipotle Sauce to the masa and mix sauce in with your hands until completely mixed in. Set masa aside while preparing the filling.

1. In a medium pan, heat the olive oil and add the cooked black beans with some of its broth. Once beans begin to boil, add sea salt and mash the beans until creamy. Transfer the beans to a bowl and let them cool.

3. Place the tamales in a steam pot with enough water to steam for about 40-45 minutes. The tamales should be placed into the pot standing tightly upright, filling-side up. You can secure the tamales with crumpled up aluminum foil so they don’t fall over in the pot. Cover the tamales with extra corn husks to trap in the steam, and place the lid on top of the pot. The tamales are ready once the masa separates easily from the husk. If they need more time to cook, make sure to add more water to the pot before steaming longer.

4. Let the tamales rest for about 10 minutes before unwrapping them. Remove corn husks from tamales and enjoy!

Sylvia Garza is the founder of Qué Mami Organics, which creates and sells certified organic Mexican food products, such as tamales, mole sauce, salsas and more. Inspired by the traditions and recipes passed down to her by her mother and motivated by a more holistic approach to health, Sylvia began her business in 2011 to provide the healthiest, freshest, completely organic Mexican food without compromising authentic flavors. Her products are available for sale online and at local farmers markets and select natural food stores around the Coachella Valley.

View From Louisiana to NYC: Tips to Keep Your Tailgating Fumble-Free Recipe
Seed to Sauce